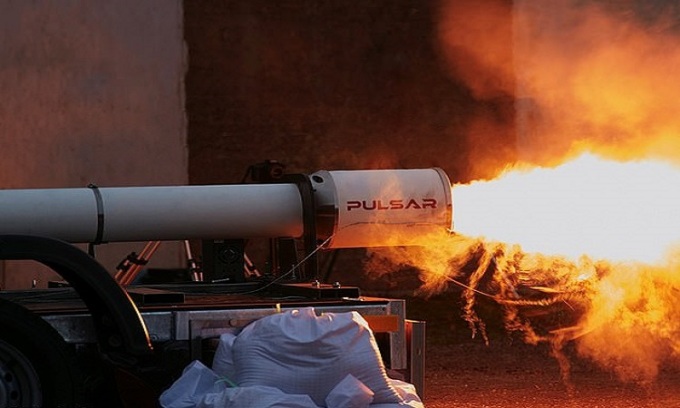 Pulsar Fusion, Bletchley fusion energy company, conducted successful tests at COTEC, a British Ministry of Defense military base in Salisbury, on November 17 and 18. Rocket engines that run on plastic waste have a wide range of applications, including carrying people and satellites into space, according to Pulsar Fusion.

Pulsar Fusion’s biggest ambition is to produce supersonic propulsion, using fusion energy technology for interplanetary travel, reducing the time it takes to get to Mars in half. Currently, the company is developing a prototype fusion reactor designed to generate plasma hotter than the surface of the Sun.

Last week’s static fire test revealed dramatic visual effects in the form of diamond shock waves, a wave pattern commonly found in the tailpipes of space propulsion systems. Next, the company conducted an engine demonstration in front of customers in the aerospace industry in Switzerland on November 25.

Pulsar’s rocket engine is a hybrid, using propellant in two different phases (liquid and gas/liquid). This “green” rocket works on high-density polyethylene (HDPE) obtained from recycling plastics and nitrous oxide. When burned together, these two fuels produce a column of non-toxic smoke.

According to Richard Dinan, CEO of Pulsar Fusion, hybrid engines can run on recycled plastic waste while liquid fuel engines cannot. Plastic bottles and other waste can be melted and molded into cylinders to be placed on rockets before each firing.

In September 2021, Pulsar Fusion was funded by the British government to develop a plasma engine. Pulsar’s thrusters can withstand 20 g vibrations simulating rocket launches during recent tests in Hawaii.

In 2025, Pulsar Fusion aims to develop fusion-powered propulsion for static fire testing. In 2027, the company will build and test launch a fusion-powered rocket engine into orbit.