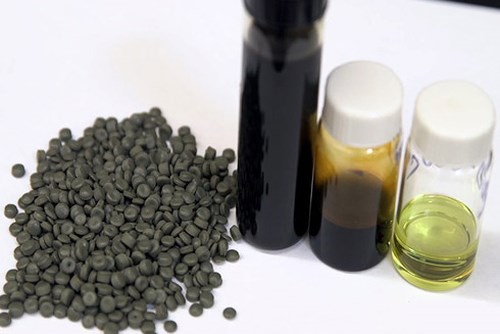 Gasoline and finished oil after recycling from plastic

Many solutions have been implemented to limit the behavior of plastic waste, including boycotting plastic bags, or using drones to detect clogged rivers around the world. by plastic waste. However, researchers from Purdue University (USA) have another idea: They want to turn it into motor fuel.

The Purdue researchers said their work mainly focused on the preparation of polypropylene, a plastic commonly used widely in the manufacture of toys, medical devices and other types of plastic. product packaging, into fuel for current means of transport. The researchers also point out that polypropylene waste currently accounts for less than 25% of the estimated 5 billion tons of plastic that has accumulated on Earth over the past 50 years that have not yet been decomposed.

The most important thing for the Purdue scientists to make polypropylene into fuel gasoline is that they need to use supercritical water – a type of water that can only be obtained at high temperature and pressure to recycle plastic. Professor Linda Vuong added that her colleagues had to heat water to a boiling point of 716 to 932 degrees Celsius, a pressure about 2,300 times greater than atmospheric pressure at sea level. When refined polypropylene waste is added to supercritical water, it is converted to fuel within just a few hours, depending on temperature. For example, at 850 degrees F, the time to convert plastic into gasoline is less than 1 hour.

Many solutions have been implemented to limit the behavior of plastic waste, including boycotting plastic bags, or using drones to detect clogged rivers around the world. by plastic waste. However, researchers from Purdue University (USA) have another idea: They want to turn it into motor fuel.

The end product of this process is gasoline and diesel-like oil, or possibly gas and water, which meets about 4% of the current world demand for fuel gasoline. In addition, some impurities in the process of converting plastic waste into gasoline will be processed by the researchers into water for irrigation. Therefore, both extraction, preparation, and processing are in the same completely closed process, so it is very safe for the environment.

“Treating plastic waste, whether recycled or thrown away, does not mean the end of a story, an issue that our whole planet is concerned about,” said Linda Vuong, a member of the Board of Directors. research team member said. Because of that, plastic decomposes very slowly and releases toxic plastics and chemicals into the soil and water.

This is a disaster for the environment, because once toxic substances are released into the environment, they can never be recovered. Therefore, scientists recommend that people, instead of throwing garbage, collecting and waiting for plastic to decompose, this new conversion process helps plastic to be used for a much more beneficial purpose.

The idea of ​​​​recycling plastic waste into gasoline by Purdue University scientists in the future can be the first step, a springboard for the waste recycling industry to develop further. “The business from the decomposition and treatment of plastic waste also promotes the recycling industry, so it is necessary to quickly apply this solution,” Vuong added.

Currently, Professor Linda Vuong’s work has received a scientific patent through the Purdue University Research Foundation’s Office of Technology Trade. This group of scientists is very careful in applying this new invention in large-scale production. However, it can be affirmed that this could be the first step of the recycling industry in the future of mankind.