A research team in Tokyo (Japan) has developed a method to convert bioplastics into fertilizer, and this invention promises to have even greater implications. 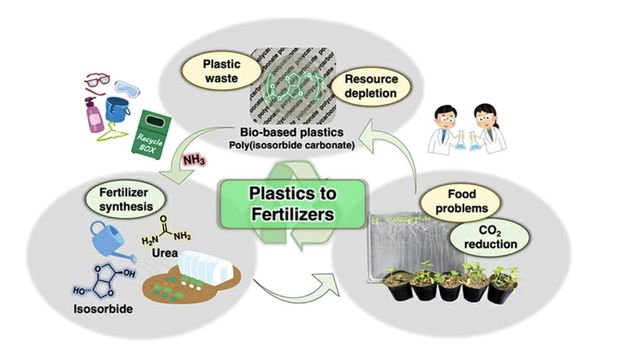 Single-use bioplastics are a major environmental problem, contaminating everything from the deepest ocean trench in the Mariana Earth’s crust to the world’s highest summit of Everest.

Statistics show that only 14% of plastic waste is actually recycled. While many experts and advocates argue that the solution to this problem is to create a revolving system whereby plastic is reused instead of thrown away.

To achieve this goal, a research team of scientists based in Tokyo (Japan) has developed a method of converting bioplastics into fertilizer. But they say their findings have even broader implications for future plastic recycling.

Study co-author and assistant professor Daisuke Aoki of the Tokyo Institute of Technology said: “We are optimistic and believe our work is an important milestone towards the development of durable polymeric materials sustainable and recyclable in the near future. This means that the era of ‘plastic bread’ is also coming.”

Bioplastics are plastics made from biomass that have been proposed as a more sustainable alternative to petroleum-based plastics. Specifically, PIC is made of a monomer (the building block of a polymolecular unit) called isosorbide (ISB), a non-toxic by-product of glucose.

ISB can be turned into fertilizer through a process called ammonolysis: ammonia is used to separate the carbon that connects the ISB monomers. This produces urea, which is a nitrogen-rich substance that makes a common fertilizer.

With new technology, plastic can do more than support the growth of plants that can become fertilizer.

While scientists have long known of ammonolysis (a type of chemical reaction in which ammonia is used as a reactant- similar to hydrolysis in which water molecules are split apart). ), the Japanese researchers managed to complete the reaction using as little energy and as little organic solvent as possible.

“The reaction occurs without any catalyst, demonstrating that PIC degradation can be easily accomplished by using ammonia in water and heating it to a higher temperature. Therefore, the process is simple to operate and is environmentally friendly from a chemical recycling point of view,” said Professor Aoki in a press release.

As Forbes reports, the Tokyo-based team isn’t the first to turn plastic into fertilizer, though. Previously, the startup Neptune Plastic had also developed a plastic from food-grade materials (safe for consumers) that could be composted in the home garden.

However, there is still some debate around whether bioplastics really should be an eco-friendly solution to the plastic pollution crisis.

And what is certain is that they don’t always biodegrade as quickly as advertised. A recent United Nations report has concluded that plastic waste decomposes very slowly in the ocean before it can become a meaningful alternative.

Of course, cyclic recycling solutions like the one that Professor Daisuke Aoki’s team is proposing will solve this problem. However, there are still concerns that growing biomass for bioplastics could contribute to climate and biodiversity crises by taking up valuable land that could be reclaimed. used for carbon storage or habitat.